What is potting and why is it used? 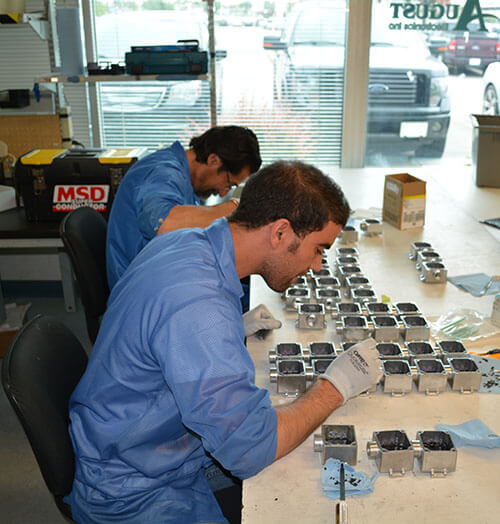 You may have heard the term potting before and been unsure what it refers to. When it comes to intrinsically safe hazardous locations approved sensors, you will often find that the circuit board inside has been covered with some sort of hard or rubber compound. The process to apply this is called potting. Potting is used for resistance to shock and vibration, and for exclusion of moisture and corrosive agents. There are many different types of potting and ways to apply it.

While there are many types of flexible silicone potting compounds, these are typically not used for hazardous locations. The preferred types of compounds are typically a two part compound that hardens into a shell to make it more tamper proof. This reduces the likelihood of a technician accidentally shorting internal components with a screwdriver.

Arcing is dependent on the spacing of connections, the amount of stored energy, and the material between the connections. If there is a large amount of stored energy and the components (or their own connections) are close enough, then the material between them must be changed from air to a substance that provides greater isolation. You are much more likely to see potting in a plunger arrival sensor than in a plunger lift controller because of the density of components in a small space in a sensor.

Finally, one other benefit to potting is that the circuit board and components are protected from the environment. Moisture and corrosive chemicals are unable to reach the electronics, adding to the life expectancy of the device. If potting is not required for temperature and arcing reasons, then a conformal coating should be used to protect the electronics in harsh environments. Check out the blog next week to learn more about conformal coating!