When we set out to build a better plunger arrival sensor, we were well aware of the multitude of issues that operators were facing. Among these issues were plastic cases that crushed, cables that broke, false detections from vibrations or other system noise, missed arrivals due to slow plungers or plungers that stalled at the master valve, and the lack of ability to adjust sensor sensitivity. CyclopsTM introduced a fundamental shift in plunger detection technology. Instead of using a magnetic pick-up coil, we introduced the use of a magnetic field sensor. This design translates the magnetic field of the earth into the digital domain. This allows us to take a snapshot of the magnetic field over time, watching for changes that indicate the arrival of the plunger. 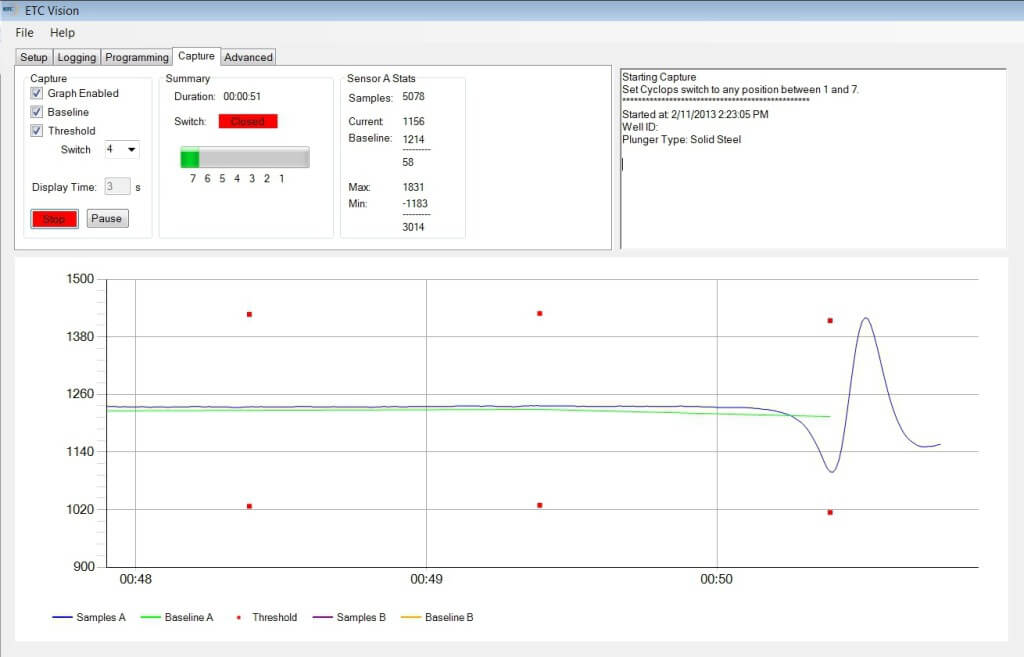 This new technology allows us to solve the issues with false detections and missed arrivals by providing a sensitivity adjustment and a real time communication mode where a user can see the plunger arrive in real time to help troubleshoot tough-to-detect cases. One of the unexpected results of some more recent trials was that the CyclopsTM eliminated issues with lightning. Kelly Mason, an optimization specialist at Conoco-Phillips in Alberta, says of his success with CyclopsTM sensors, “at this point, we have had 0 lightning caused EAF’s on the 3 we trialed them on (we picked the worst offenders…). That is with just running the stock software settings on the sensor, we still have (the) option to adjust the software further if required.” Coil based sensors are typically susceptible to lighting. In any given storm, a control system might see thousands of arrival signals coming from the sensor, resulting in system failure. CyclopsTM is unaffected by these same lightning storms. CyclopsTM is truly a revolution of the plunger sensor and we fully expected it to be just a matter of time before everyone started using it. 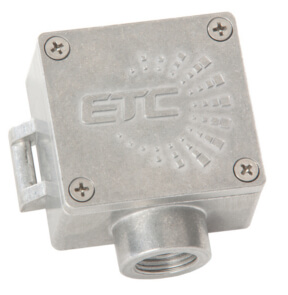 While exhibiting at the recent Red Deer Oil and Gas Expo, we were surprised to hear from several Alberta-based field operators and supervisors that they hadn’t yet used a CyclopsTM sensor. In most cases, they had heard of the product and may even have one on their desk that was provided by their plunger service company. They had been provided the product literature and were told that it would eliminate a number of the issues they were having. Using CyclopsTM should have been an obvious way to reduce down time, increase production, and reduce maintenance costs. So why doesn’t every well run a CyclopsTM sensor? We set out to evaluate our communication methods, since the product itself is incredibly sound.

The problem is that we have fallen into the trap of simply telling everyone that our sensor is the best; that it will solve all of their problems. We believe it. Our resellers believe it. Unfortunately, since other sensor manufacturers have made similar claims before that they have not lived up to, operators are hesitant to try something new for fear that it will not live up to promised potential. It is easier to stick with what they know, avoid the work required to get internal approval, update documentation, and check on installed CyclopsTM sensors to ensure they are performing as promised.

What we learned from this show was that it doesn’t really matter how good our technology is, how many problems we solve, or how much money we can save someone if they don’t know enough about the product. That’s why ETC is committed to educating users by presenting at industry events, exhibiting at industry trade shows and workshops around the world, and working with our resellers to fully educate them on the benefits of ETC products. We have some work to do, but we won’t give up until every producer knows about the CyclopsTM and how it can help them. During the show in Red Deer, we were able to use our ETC VisionTM tool to demonstrate exactly how the technology was different. The real time display allowed the user to see what CyclopsTM saw. It was easy to understand how CyclopsTM worked and what a plunger looked like when it arrived. It was clear how the CyclopsTM was able to “see” a slow moving plunger, why it wouldn’t trip on noise from other systems, and how the sensitivity adjustment worked. It became apparent that CyclopsTM really was changing the way plungers were sensed and that using it would pay for itself in a very short amount of time.

To learn more about the Cyclops, please visit the Cyclops IS or Cyclops ExP product pages.

If you have any other questions, comments, or concerns, please do not hesitate to Contact Us.  We would be glad to help arrange a product demonstration for your team.